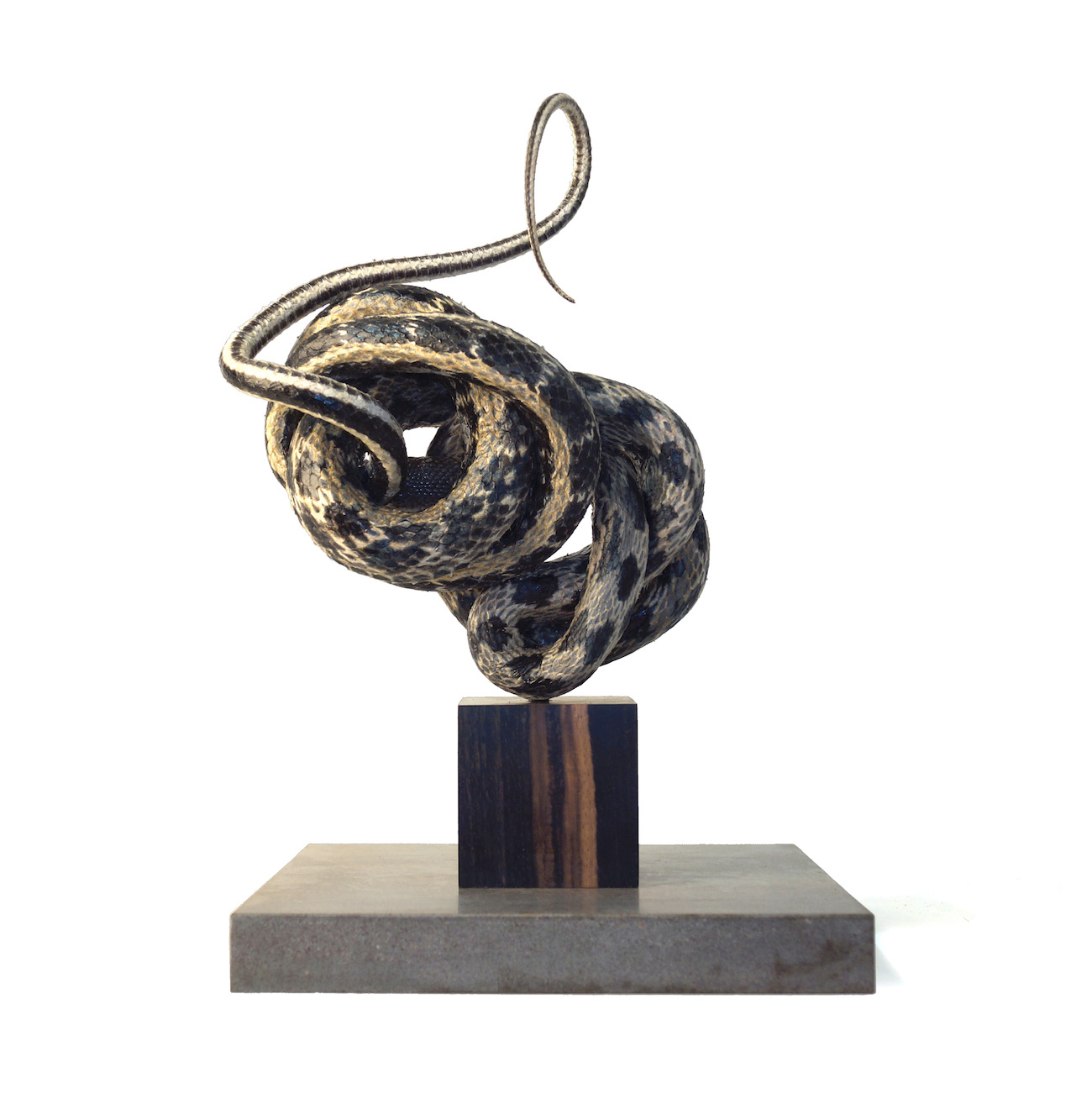 Posted at 11:04h in Copy Writing by Rajesh Punj

With childhood ambitions to act; Polly Morgan, born and bought up in the Cotswolds; completed school and studiously decided to attend Queen Mary’s, University of London instead. Pedestrianly graduating in 2002 with an English Literature degree. It was her extra curricula activities, including working at the Shoreditch Electrical Stores, London; that proved significant for her foray into the art world. A popular bar for artists and graduates alike, it was where she met her then boyfriend, British Sculptor Paul Fryer and started to attend East End openings. Influenced by Fryer, and the bar’s clientele quite possibly, Morgan took up ink drawing and clay sculptor, whilst attempting to decorate their apartment above the bar. Experimenting with mediums, she finally took an interest in taxidermy; as a consequence of attempting to buy ornamental creatures, and being frustrated by how alive the encased animals looked; wanting them to play dead. It was suggested to her she learn the technique herself, and she subsequently contacted the most qualified taxidermist in the country, George Jamieson, of Cramond, Edinburgh. With who she learned, within less than a few hours, the initial practice of stuffing a dead animal with a frozen pigeon.

An almost revelatory experience for the literature graduate, Morgan immediately took to taxidermy as a preoccupation for her engrained love of nature and its regenerative energies. Hastily (as she describes it), producing four works in those first few months, that for their daring caught the eye of the celebrated British graffiti artist Banksy. Morgan had by then determined her own artistic enterprise; that would draw this self-taught artist to the attention of collectors Anita Zabludowicz, and David Roberts. And gallerists Jay Jopling and Mollie Dent-Brocklehurst among them. Banksy invited her to exhibit at his temporary gallery, Santa’s Ghetto, and from there she exhibited at White Cube, London (2008), the Haunch of Venison, Burlington Gardens, London (2009), Gimpel Fils, London (2010), Kunstmuseum Thurgau, Switzerland (2010), and the ACC Galerie, Weimar, Germany (2013), among others. With a solo show about to open in New York, at Other Criteria, 11 September – 22 October 2014.

Sometimes Something Happens 2014, courtesy of the artist

Rajesh Punj: Can you possibly begin in the moment, and explain your work now and your forth-coming solo show in New York?

Polly Morgan: The last couple of years I haven’t really been particularly happy with anything I have been making. I have been struggling to enjoy it. Not ‘enjoy it’. I do enjoy it. I enjoy the making, but the process of coming up with something that I felt was satisfactory, has been quite tricky, for the last few years. And I have finally pinned it down, or pinpointed that maybe my aesthetics have changed really, over the years as I have grown older.

And also as my knowledge of historical and contemporary art has improved. Because it was terrible to start with. I didn’t go to art college. I just started making work, incredibly naiively really.

RP: Can you explain a little of your background?

PM: I read English Literature at college, not that I was especially driven by that; but although I did for a while think I would write, and I did do a little bit of freelance journalism. It just didn’t occur to me that I could do art, for some reason. I used to make things constantly, and I was really into the subject at school. (At the time) I didn’t know any artists, I didn’t know anyone at art college. It was just never suggested to me, and English seemed like the inevitable thing to do. So in a way that really helped me to start with (making work), because I was naïve enough not to question every little thing that I did. And also I didn’t have these high hopes or ambitions to be an artist. I just started making stuff. And I was living in East London, and had friends who were on the periphery of the art world, or some of them were quite successful artists. And it got seen by the right people, and picked up quite quickly. And that all snowballed the interest in it, and I felt like I have been catch up for years really. Trying to make works that justified the attention I was getting, and never really feeling I was.

RP: Art writers and critics can be a little over jealous on occasion, labelling and categorising everything pretty quickly. Leaving the artist unassailably attached to one camp or another. Is that what happened to you then?

PM: I think that’s probably what happened. And I think it was partly that I put some work in a show that he (Banksy), used to put on at Christmas. I would say yes to a show, if someone would offer me a show, and I didn’t think about the repercussions, or any idea. And I really didn’t think it would last longer than two or three years, so I did whatever happened. And it was only in hindsight that I realised that that set me off in a direction that I possibly didn’t want to go in. Anyway for the first time, these works that I am making are devoid of narrative, and they are much more about the animal as a sculptural form; as a kind of… I have chosen snakes because they are long thin tubes really, and they are malleable and you can do so much with them. And I am trying to get away from the symbolism behind snakes, which is irrelevant to the works I am making. And they are kind of modernist in influence. With these loops and curves sitting on these blocks of marble or granite, and hard wood.

RP: So this appears to be a major departure for you, from your original idea of animals encased and almost macabre in appearance?

PM: it’s a sort of bridge I think, because it’s still taxidermy. But it feels like it is taking me away from the associations of the gothic, which I always had attached to my work. Which I can understand, but at the same time I think a lot of it came from my working with material that happened to be a dead animal. But someone who draws in charcoal, their material is brunt wood, but you don’t think of it in the same way. For me it really was a material I was using as opposed to… death had to happen in order for me to use the skin, but it wasn’t about death. (Referring to her new works for her forth-coming New York show), so they are not meant to look natural in any way, they are just coiled up in positions I found attractive really. There are about thirteen of them downstairs, (in my studio), none of them actually fixed on yet. And nine of them are going out to New York.

RP: So there is a sense that these works are moving more towards abstraction of the ‘form in space’. Is that an important departure for you?

PM: It is yes; and they are works that I just like more, and they are in keeping with my aesthetic. I suddenly realised that there was this quite big chasm between the work that I was making, and the work that I like. And I would have conversations with friends about it, and they would say it’s not really relevant whether you like your own work. You make what you make and that’s what you do. You continue along that path. And I have heard that from quite a few people. And I was going along with it a little bit, but at the same time I was convinced it can’t be right to work all day, and sleep at night and think that you are producing ‘bad’ work that is pointless, and that you are embarrassed standing next to it at your own private view. Which didn’t feel right. So I think for me, certainly with these snakes, I have found a way to make something I would like to own. And get away from people telling stories about my work that weren’t in my head when I made it.

I don’t like to be didactic about the work, and suggest that this is what it means, and this is what you will take away from it. I do like the idea that it exists outside of you once you have made it, and it has its own life, because everyone looks at it very differently. I did feel that there was a real disconnect between what I saw myself and what I was making; and how other people were receiving it.

RP: How do you feel about terms like ‘decorative’ or ‘attractive’ in association with your early works?And are you consciously attempting to move away from that now?

PM: Yes quite ambivalent I suppose (about such descriptions); that is something that has always worried me about my work. To start with it was very ornamental. And actually I think it was fine, and it was okay to be doing that, but suddenly I found myself as an artist, showing in art galleries, and it was not really what I intended. And that’s when I become incredibly critical of my own work.

If I had seen my own work in a gift shop, or even in someone’s house, I would have thought ‘that is really pretty’. But soon as it was in a gallery, I would look at it as a viewer in a gallery, and think that’s not really good enough. And I think my problem is that I always try to pre-empt criticism before it happens.

RP: I interviewed (British Sculptor) Richard Wilson some months ago now, and he and I were talking about another artist who has done just that. Of negotiating their way out of control. And someone who is now clearly producing far too many works for a gallerist demanding that of them. There is a danger of submitting to that kind of prescribed pressure, whereby that is the ‘deal’, and that is what you go with.

PM: I realise I just want to enjoy my job, that’s the thing. And when it is on my terms and I can take it at my pace, I really love what I am doing. But as soon as I am working with someone who wants to work at a slightly different pace to me, I can really feel myself resisting it with every fibre of my being. And I really don’t enjoy it, and the work is no longer pleasurable, and I don’t sleep aswell. And my ideas aren’t as good. And I have learned now.